Member of the police force

Police hat
Sebastian is a runner dragon police officer tasked with escorting you during your stay. He is a regularly recurring character in the main story as part of Reza's investigation and plays a somewhat big role.

Sebastian is calm and serious at the same time, trying to remain professional and polite, he calls the protagonist "Sir" during the course of the story unless he/she tells him to stop being so formal, he's also quite shy when meeting the player for the first time and in the police department due to being the "newest guy".

Sebastian also has a kinda playful and mischievous attitude sometimes such as when the protagonist finds him playing with Bryce's chair in his office, or when they go camping.

Also Sebastian doesn't seem to like interruptions, always acting like being in a rush or annoyed when other characters engage in a conversation with the protagonist while he's around.

Sebastian used to be a country-boy living in a Runner-powered farm far away from the city, he decided to become a police officer in order to find out what was beyond their vegetable fields and if it was like the stories he heard.

One time, Sebastian had to chase a shoplifter who happened to be a Flyer, it is unknown if he was successful.

First met: Greet your new pal with a kiss in his hand.

Outside café: [How nice of you]

Crime scene #1: Do well on the first investigation.

[Don't call me "Sir"] Or [I appreciate it] if the player does not mind the formality.

[Actually, I just meant you don't have to be so formal with me] If the first option was chosen before.

[You've been doing a great job so far. Don't worry about it]

[What can you tell me about the people?]

[What is it to work with Bryce?]

[What's it like having so many different species on the force?]

[What can you tell me about the land?]

[Do you have any special recommendations or secrets I should know about this town?]

[You've got my heart already]

Town: Do well on the second investigation

Portal shooting: [Stay inside and call the police]

Do well on the third investigation

Bryce's office: [If it's that important to you, why don't you just watch it regardless?] Only available after you see Sebastian's death at least one time. 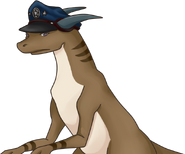 Sebastian meeting the protagonist for the first time

Sebastian's tarot card
Add a photo to this gallery

Retrieved from "https://angels-with-scaly-wings.fandom.com/wiki/Sebastian?oldid=1425"
Community content is available under CC-BY-SA unless otherwise noted.