Remy is the first dragon you meet upon your arrival in the dragons' world. He is one of the five main cast with their own routes and shows up throughout the main story. He works as the librarian and scholar at the Ministry of Culture and Arts in the town.

Remy is a friendly and polite dragon, eager to do his job well and follow his duties to the letter. However he has endured terrible hardships which have left him empty, depressed and anxious, also feeling bullied by his superior Emera, thinking she has hired him just for her own entertainment due to his clumsiness and poor suitability for the job.

A few years before the game's events take place, Remy worked in the public sector. He was part of a community tasked with providing independent and factually backed opinions on community topics which was intended to help both politicians and the general populace.

One day, Remy met a person named Amelia while being tasked with determining the viability of several projects. Amelia was a member of a scientific team vying for a grant. Ultimately, Amelia's team didn't get the grant.

A while later, Amelia saw and recognized Remy in a restaurant and they started talking. Remy thought she was very smart and admired her spirit. Amelia's desire to help people with her talents reminded Remy a lot of himself. So the duo kept seeing each other and grew close. Before long, Remy and Amelia were dating.

Just as Remy thought that their relationship was about to become very serious, Amelia informed Remy that her research team had applied for another grant. Due to this, they decided not to meet each other again until the grant winner was determined as their relationship could be seen as an influence with the judging of the viability of projects.

After Amelia's team won the grant, they made a commitment to return to each other and make their relationship public six months after the grant was given to her team. This was to avoid putting their jobs in jeopardy.

After this Remy never heard of Amelia again. Only later did he read from various reports that Amelia had gotten sick. However, Amelia continued working from home as their project was behind schedule. One late evening, Amelia went out to pick up her medication and something to help her stay awake. Being sick and overworked , the combination of both her medication's side effects and her supplements caused her to collapse. No one saw her fall. She was found the next morning covered by a blanket of fresh snow but it was too late, Amelia had frozen to death that cold winter night.

This caused Remy' life to go downhill as he thought that it could be avoided if they stayed together and didn't keep their relationship a secret.

- Better be safe than sorry.

- I was interested in what you said the other day. You have myths about humans?

- Alright. How do I fit them in, alphabetically?

- That does sound very intuitive.

- Well, I can tell you that there is nothing supernatural about me.

- I have to admit I was, too. I was speechless when I saw you, and that wasn't just a side effect of the teleportation.

- Look at his computer.

- I just wanted to see what was on it.

- I'd like to know more about your human myths.

Don't talk about recent murders, other choices do not matter.

This choice does not matter.

- I wouldn't mind playing some of your video games.

- You don't need to apologize.

- You should resign, consequences be damned.

- I remember that you said you always wanted children.

- I just wasn't in the mood for anything more complex.

- Let's try some together, then. 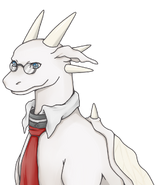 Add a photo to this gallery
Retrieved from "https://angels-with-scaly-wings.fandom.com/wiki/Remy?oldid=1374"
Community content is available under CC-BY-SA unless otherwise noted.