Emera is one of the datable side characters the player can meet. She is the minister for Culture and Arts and arranged the player character's visit to the dragon world.

While Emera may at first look intimidating and/or cold, she is a very well-mannered and polite dragon who is very interested in "humanism".

She sees the human's arrival as not a good opportunity to increase her political image but a great chance to get to know those mythical creatures she always wanted to see.

Even though she tries to look professional and somewhat cold, she can't help but feel amused and excited when the protagonist decides to meet with her and talk.

Emera grew up in a village mostly known for it's mining industry (most likely only earth dragons worked there), her father worked hard day and night to advance his career while her mom's actions remain unknown, Emera claims she was more of a "spiritual person" suggesting she may had been a fortune teller or something of the sort.

After years of saving up, Emera's family rose to the skies by creating a new business, Emera's parents had high expectations of her, wanting her to study and work to keep up with them, however she disagreed and made her own life by becoming a politician when the chance appeared.

a) First meeting: During the second investigation, visit Tatsu Park, then go to the political district.

- I have to admit, they are pretty funny. (Only available after getting one of Remy's endings)

b) Official meeting: In the second chapter you will have the chance of meeting with Emera just like you meet with any other dragon during your free time. Choose the right option.

- Not too busy for a visit like this one.

- Work doesn't have to be enjoyable.

- It goes well with your make-up and jewelry. 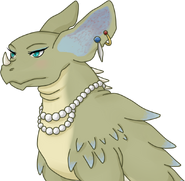 Emera resting
Add a photo to this gallery
Retrieved from "https://angels-with-scaly-wings.fandom.com/wiki/Emera?oldid=497"
Community content is available under CC-BY-SA unless otherwise noted.