Anna is the manager of the town's production facility creating the generators for humanity, as well as being a brilliant award-winning young scientist. She has an abrasive and unruly nature that gets her in trouble with the authorities and other citizens from time to time.

Having a generally distasteful and stand-offish attitude to nearly anyone she meets, Anna typically comes off as being rude and even openly admits she doesn't like people in general. She feels she is above many people, and can often be rather full of herself. She does however have a very mischievous, wild, and even playful attitude when around a certain person that she doesn't "Totally hate". Anna feels that she is always in the right when doing something for the greater good. Feeling bureaucracy and regulations restrict her from doing what is necessary for her research, she is willing to do anything to continue her work on her potentially life-saving experiments, even if it is illegal for her to do so. She fills her free time with her work, having few hobbies outside of researching, experimenting, and generally advancing upon her discoveries.

Her brilliance showed even from early on, as Anna's intellect had her frequently skipping grades in order to keep up with her intellect. She made few friends as a result during school, however she won many awards for her work throughout this time. She cared little for them, focusing instead on her work and eventually began the research she is seen working on throughout the game. As Anna was conducting her cancer research, she found out that she herself has cancer.

Anna genetically engineered Amely from Amelia and Remy's unborn daughter by splicing in her own DNA. She originally intended to use Amely to complete her cancer research in hopes of curing herself. However, she heard of a government check on her lab so she placed Amely's on the doorstep of the orphanage. She wrote the name Amely on the shell of the egg.

a) First met: Give her your blood, telling Reza that you did or not - doesn't matter.

b) First date: Select the next choices to improve Anna's mood.

[Guess you can give me the tour some other time, then]

[What a lucky coincidence]

[It would be my pleasure]

[I think she was just trying to be friendly]

[Yes, totally. You can call your lawyer if you like]

[I'm being cute and spontaneous?]

[Maybe you shouldn't underestimate me]

[Try to get into her lab] OR [Wait] The latter only works if you went on Remy's third date.

[Losing track of time happens to the best of us]

[I can see your point. This was unusual, but fun]

[How nice of us to leave some for him]

e) Third date: Don't wuss out on Anna's experiments, she won, too! (Technically)

[I wouldn't miss an opportunity to meet you]

[Says the queen of complaining]

[Go ahead and poke me if you need to]

[No need to point out the obvious]

[Why don't you print them out and have them framed?]

g) Fourth date: Tell her you know and comfort her

[Tell her you know about her cancer] If you found out about her cancer via reading the envelope, she'll get mad at you. To avoid this, go on Remy's third date on another run, he'll tell you instead and Anna wil not get angry 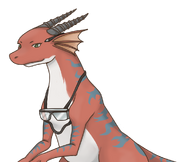 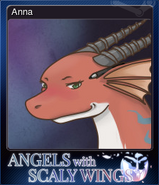 Anna's card on Steam.
Add a photo to this gallery
Retrieved from "https://angels-with-scaly-wings.fandom.com/wiki/Anna?oldid=1408"
Community content is available under CC-BY-SA unless otherwise noted.